7 Tips For DOMINATION In Taekwondo Sparring 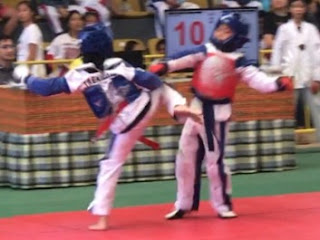 Pay attention to the right guy's hands.
Sparring isn't easy, especially in Taekwondo. Take this from a long time Taekwondo veteran. But there are some fairly easy ways to instantly lower the difficulty.

The game is fifty percent mental. One of the best ways to win against your opponent is to understand them. Start by classifying your classmates by weight, style, and range. If you practice this enough, you'll be able to easily classify a new opponent in a competition.
For example, I have several style divisions and subdivisions. At the top of my hierarchy, you have passive and aggressive. In the aggressive category, I have additional tactical and positional categories. In an entirely different hierarchy, I sort players out by weight as well. Because of this system, I can quickly apply labels to different players no matter the situation. For example, one of my opponents is an aggressive, but still positional player, as well as being a lightweight but still very tall. I know that aggressive players can get carried away and accidentally leave openings, and those positional players can get carried away with attempting to confuse the opponents, so I would say that I would focus on predicting their movements and intercepting that. In addition, taller players tend to rely on their range a bit too much, so a well-placed push can create lovely openings.
Some people prefer a tag-based system, which is a little more free form and in some applications, more useful. You would have a bunch of tags in your head, i.e. Fast kicker, passive, reactive, and then you could apply those tags to players. This can get confusing very quickly, so I wouldn't recommend it for beginners.

A good combo can often make the difference between a win or loss, so it's essential to practice them. The best thing to do is to look up Taekwondo combos on YouTube and set aside a half hour to just practice that specific combo.
Why are combos useful? First of all, they're usually designed to have a variety of different kicks, which is immensely useful for breaking through a solid defense. If you can train your body to do it fast enough, it makes for a very surprising trump card.
Second of all, they can be used as good practice. Even if you're not going to do the full combo. Knowing how to quickly turn a forty-five into an ax kick can score some great points.
Third, they can be used to simply close the distance in a way that doesn't leave you quite as vulnerable under the right circumstances. Many times, I'll use a combo to close the distance, as players are simply unused to a flurry of kicks, or doing a push kick is too risky due to the opponent being fast enough to knock the kick aside and create an opening.
Keep in mind that it's essential you know when to use a combo. Most of them are designed to be used as you're both waiting for the other. As such, doing it as the dude is mid kick probably won't work.

Something that can give you a massive edge is examining major competition fights and watching technique videos. This information is available all over the web and is super easy to get to. Start by sorting players out when watching. After that, analyze the techniques they used against each other and add them to your notes.
Yeah, that's right, notes. I would highly advise getting a notebook dedicated to Taekwondo techniques and strategies. It can be immensely helpful having information sorted out and on paper, as odd as that sounds.
Don't be afraid to reach out to fellow Taekwondo players, either in real life or in a forum if you need help. Reddit has a Taekwondo community, it seems to be the largest, so I would highly recommend sending questions and concerns there.
Don't limit yourself to Taekwondo, however. There's a ton of general martial arts information to be found all over the web. Heck, I would advise reading general books on warfare. Sun Tzu's The Art of War is a great read that's applicable to virtually any situation. I highly recommend reading it and coming up with techniques based on it.

As already mentioned in my other posts, an excellent way to improve any skill is to work on it at home. But be smart. Don't just do general speed training. Don't get me wrong, do speed training, but don't only do it.
Something that I haven't mentioned yet is the need to characterize your own style. If you have a guardian who comes with you, ask them to record your fight so that you can review your technique.
Note your weak points. Those are the areas you need to work on. If you see a badly executed combo, work on that combo until you can do it perfectly.
Work on your strong points as well. Having a hidden trump card that you've practice can be very beneficial. Remember, deception is warfare. Keep them guessing. Make sure when they guess, it's always wrong.

Don't forget to maximize your training at the class as well.

There's a large number of resources available easily on the web. Visual learner? Alex Wong and Master Woo will serve you plenty well. If you don't have fast enough internet for that kinda stuff, Tactical Taekwondo has sparring drills among other things, including poomsae and other techniques. Jungdokwan has some info as well, though they usually focus on history and poomsae.

Quite a bit of my tips centre around preparation. That's great, but sometimes it's essential to be able to think mid-fight. You obviously can't just start diverting your mind away from kicking to focus on thinking out your next move. While in the midst of an engagement (i.e both of you are actively kicking and moving), a good way to get away from your opponent is to push-kick them away and keep push kicking them when they try to get close. Do not lean into the kick. I repeat, DO NOT LEAN INTO THE KICK. Keep your head away from your opponent at all costs. Be quick to sidestep and slide back as well should your opponent attempt to follow up. This can buy you precious seconds to analyze your opponents move set and come up with a solid counter.
Don't be afraid to shout either. Shouts coming from out of nowhere can surprise them and dissuade them from kicking, as they think you're about to go on the attack. Remember the goal of all these movements, however. You're trying to grab extra time for thinking. It's easy to get carried away and focus on defending. Don't. Analyze the situation and come up with an appropriate response.
Note that in most situations I would highly recommend preparing all your strategies against all different styles and weight classes early on. This is just for how to do it in case your in trouble and need to get out of the engagement now.

As has already been discussed in my posts many times, mental imagery is very, very powerful. Whether you're in the ring or outside, it can be very useful to imagine the winning kick. However, I've already covered preparation to an extensive amount in an earlier post.
This actually ties into tip five. As you're planning your strategy, imagine the hitting kick. See just how fast it is. Keep it grounded though. If a roundhouse kick couldn't break through earlier, it probably couldn't now. So how did you land that kick? Imagine the way you broke through the guys' defense or the way you opened the combo. Whatever the case, detail is essential.
Don't forget about the real world! While you're busy strategizing, this could be the opportunity your opponent has been waiting for. Be careful not to instinctively slide back, as this could be what the dude is waiting for. Remember the power of the sidestep.

This is the big one. Even when you aren't confident, even when you know you'll get your butt kicked, act as if you are in total control. One of the scariest things I've ever faced was a totally relaxed opponent. He was smiling and joking on the way to the match. Every time he kicked he shouted loud and was constantly ready. He knew he would win the match, and that unnerved me and affected my performance.
You don't need to necessarily be confident, but I would highly recommend working on meditation to clear your mind and focus on the goal, which will make you confident.
No matter where you go, this rule has to be enforced. Stand up with your back straight whenever possible. Don't stutter. This attitude of confidence has to be in every aspect of your life if you want it to stick around. Even when you don't feel it, act as if you do.
This doesn't mean giving anything other than your best, by the way. It doesn't mean being an arrogant prick either. You still need to give your all if you want to win, confidence or not.
Confidence means knowing that you'll give your best, and regardless of win or loss, you'll still learn something.
So yes, don't focus totally on winning. If you focus too much, you'll be disappointed when you lose at some point. Focus on giving your best no matter what.
That's the big one.
fight kick kyorugi martial arts spar sparring taekwondo tips 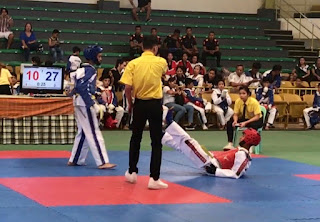 While careful preparation is useful, if thrown into the middle of a fight and you can't waste time thinking, it's enormously beneficial to have some strategies that you can easily employ that can instantly change the course of the fight.
Or maybe, you simply can't be bothered to strategize like that due to the many thoughts flying around in your head or you're an instinct based fighter. Again, that's fine. But even then, it's immensely beneficial to have some kind of quick-fire, easy to employ strategy.
Here are my personal strategies I have ready all the time.

#1 - Attack/Defence Switch
Most of us tend to fall into a defense/counter move set or we go on the attack. The problem is we fall into those roles for the entirety of the match, which is incredibly dangerous and predictable. Note that oftentimes you'll see players falling on the defense or offense side TOGETHER during a match.
One of the fastest ways to throw anybody off is to switch between the two en… 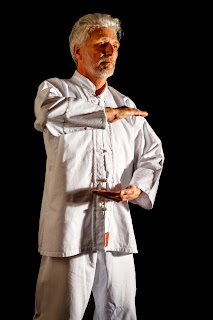 5 Steps to Prepare to Win ANY Taekwondo Fight

When fighting in Taekwondo, one of the worst enemies you can face is yourself. When fighting, I am very rarely defeated due to the opponent being stronger than me. Lack of focus and nervousness is what really wins.
It doesn't have to be that way. It is possible to mitigate and even outright ignore these issues with proper instruction and practice.
Here are five steps for winning the Taekwondo fight inside your mind.
#1 - Calm Down
Before you can do anything, you need to have your head cleared of all distractions. Trying to pour more water into an overflowing cup only results in a nasty mess. Start by pushing your mind away from everything. Breath in for five seconds, hold it for eight more. Finally, exhale for five seconds.
Focus only on the sound of your breath. Repeat this several times until you feel all of your stress and worry fade away, your mind totally free.
#2 - Focus On Your Goal
Now you need to get your head straight and focused on your goal. As you breathe deeply, repe…